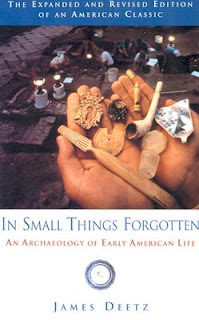 Yesterday on my Facebook wall I asked my friends what they considered essential non-genealogy books about New England.  The list they provided was diverse and fascinating.  Some of the books I have already in my personal library.  Others I had heard of but never read.  And still other were completely new to me.  The list was so good I'm sharing it here with Roots & Rambles readers.  Maybe you'll be inspired to read one or two of these before the summer ends.

Thanks to all my friends for contributing to this list!

Atwater, Edward Elias. History of the Colony of New Haven to its Absorption into Connecticut.

Cronon, William. Changes in the Land: Indians, Colonists, and the Ecology of New England.

Deetz, James. The Times of Their Lives: Life, Love, and Death in Plymouth Colony.

Gross, Robert A. The Minutemen and their World.

Kurlansky, Mark. Cod: A Biography of the Fish that Changed the World.

Lepore, Jill. The Name of War.

Nutt, Charles. History of Worcester and its People. (available for viewing on Google Books)

Ulrich, Laurel Thatcher. The Age of Homespun: Objects and Stories in the Creation of an American Myth. (2001).

Wilson, Donald A. Logging and Lumbering in Maine.

I have to admit that I am still mulling over Michael Hait's post " The Genealogy Paradigm Shift: Are bloggers the new experts? " There's one last part I need to discuss and then I think I will be able to let it go.  In his final section he discusses what he'd like to see from bloggers in the future. He's hoping they'll give more consideration to the fact that their blogs are public and many people are reading them.  This post does not directly address that issue but gives voice to my visceral reaction to the topic which is the matter of genre. Within the field of genealogy there are many different types of genre that are played out in printed publication.  As we explore these types of genealogical genres we have to ask again, what is genealogy?  Is genealogy strictly when we are talking about discovered family connections and the citations we show to prove those connections?  Or does genealogy encompass everything from the materials that we create to