Heritage Gift: The Deck of Cards has Arrived 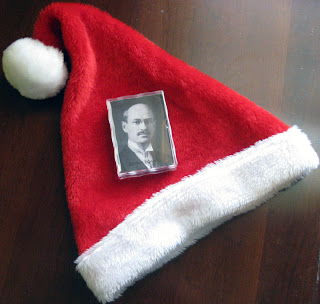 Previously, I wrote about creating a custom deck of cards with photos of my ancestors.  It was fun making the deck but the true test is in the final product.

The first thing I noticed about receiving the deck was that it came directly from Hong Kong.  When using the Printer's Studio website I suspected they were located outside of the United States but didn't know for sure. So keep that in mind if you choose to use Printer's Studio.  It could impact delivery time or it could be important to folks who choose to support businesses a little closer to home. The big issue for me is safety.  Products from the United States, Canada, Europe and Australia, etc are monitored closely to protect consumer safety.  Products from some other parts of the world aren't.  When a large manufacturer imports goods they are held more accountable.  When I am ordering goods directly, I'm not sure that my safety (thinking of inks and children) is a consideration.  Not a deal breaker but something to think about. 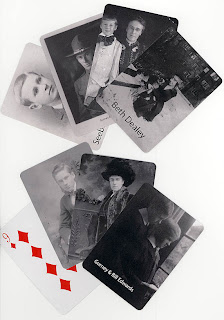 The cards arrived in a nice clear plastic box (see photo above) which was a little better quality than I was expecting.  The size of the cards was fine too - probably standard playing size.

The big thing that did surprise me was the photos were all in black and white.  When I created the cards I had assumed my photos would be in color. I didn't see any notice to the contrary.  I just checked the website again and didn't see any mention of the cards being black or white.  There was simply no reference to the end color.

Now that's not really a problem in general.  Most old photographs don't have much color anyway.  The issue, however, is contrast.  The text didn't show as well on certain cards because the shading differences were too subtle.  Some cards came out really nicely in black and white and some became overly dark.  If you choose to get these cards, I would recommend converting your photos to black and white first so that you'll be able to see the anticipated end result.

I did contact Printer's Studio about their policy of printing the same photo on the same number (hence easily turning the fun into a memory game).  I asked them if they could change their system so that the photos could be printed randomly on their cards.


"Hi Marian,
Same image for same # is the idea from our customers.   They don't want same image for all prints but they just have 4 images.   We do have more options on 13 images or 54 images for a deck.   Our IT team is working on your idea of uploading your images and click on the button "autofit" to fill up all the cards randomly.
We appreciate your idea and please do keep on writing us email if you come across more ideas in the furture.
Your PrinterStudio Team
www.PrinterStudio.com"

Their response was very upbeat but doesn't sound like they are going to make any changes soon.  I think the only thing you could do would be to select the 54 images option and then randomly place 13 (or 4) photos across the 54 cards.  Truth is, anything with more than one image is going to allow for memorization or card counting.  There's no way around it.

In this particular case the focus is more on the photographs of my ancestors as a keepsake and less about the cards actually being used for playing.  So this is not a big issue for me.

In the end I think I got a good product at a reasonable price (US $7.99 +$5.99 shipping). I ordered the cards on November 28th and they arrived December 12th.  That was exactly a two week turn around.

The quality of the cards and the case was good and overall the photos printed well.  I would have preferred the photos to be in color but I am happy I tested this on one deck so that I can tweek the process for the next time.

I will continue to search for a reasonably priced alternative a little closer to home but I'm not sure I'm going to find it.

Would I recommend Printer's Studio to others? Yes, I would. Please pay close attention to notes about contrast and text above and you will be happier with the end end result.

I have to admit that I am still mulling over Michael Hait's post " The Genealogy Paradigm Shift: Are bloggers the new experts? " There's one last part I need to discuss and then I think I will be able to let it go.  In his final section he discusses what he'd like to see from bloggers in the future. He's hoping they'll give more consideration to the fact that their blogs are public and many people are reading them.  This post does not directly address that issue but gives voice to my visceral reaction to the topic which is the matter of genre. Within the field of genealogy there are many different types of genre that are played out in printed publication.  As we explore these types of genealogical genres we have to ask again, what is genealogy?  Is genealogy strictly when we are talking about discovered family connections and the citations we show to prove those connections?  Or does genealogy encompass everything from the materials that we create to